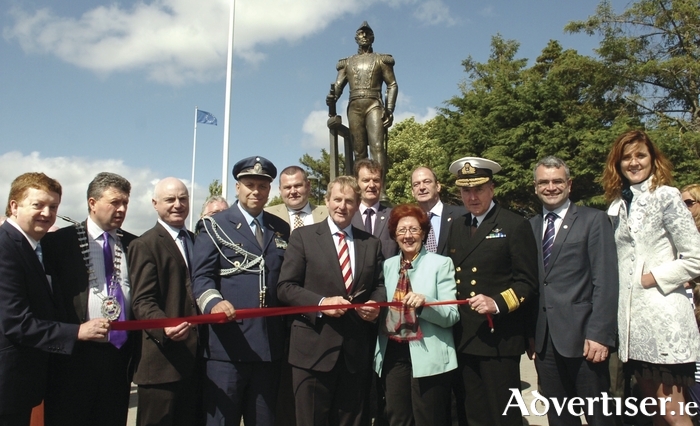 Relive the History of Admiral Brown

The opening of the Admiral Brown Promenade in Foxford is a significant development in the ongoing relations between Foxford and Argentina. The idea of a memorial promenade was first mooted by the late J.J. O’Hara, President and members of the Admiral Brown Society. The promenade depicts Brown’s life story in 20 bronze plaques and the story of Foxford.

🚶 Directions to the Promenade

The promenade is situated alongside the River Moy in the shape of a ship with stunning views of the river. It was designed by Kevin Keegan, Senior Architect, Mayo County Council. The statue of Brown occupies a prominent place in the centre, was created in Rosario, Argentina and was donated to the Admiral Brown Society by Mr William ( Bill) Durkan a native of nearby Bohola 👓 Street View. A similar statue is located on Sir John Rogerson’s Quay, Dublin and was also donated by Mr Bill Durkan 👓 Street View.

The plaques were designed and cast by local sculptor Tim Morris, with the promenade itself being designed and built by Mayo County Council in partnership with the Foxford Development Association.

“The Admiral Brown Promenade recognises Admiral Brown for the local, national, and international hero that he was” – Mr Peter Hynes

Peter Hynes, Chief Executive of Mayo County Council, said: “The Promenade is a significant project which acknowledges the strong links that have been forged between Foxford and Argentina over the years, and recognises Admiral Brown for the local, national, and an international hero that he was. This initiative shows collaboration at its best with the local community working in partnership with Mayo County Council on a project that reflects our history and great links with Diaspora.”